Each year I talk to many, many people who either have just recently started their Kickboxing journey or are about to start. And most have similar questions about how to get started and what should they know first.

When they come to me on how to get started, the first thing I make clear is I do not teach “cardio-kickboxing”, “Tae-bo”, or any other form of aerobic exercise put to music with movement that could just as easily be confused for dance than for martial arts. I teach an actual form of martial art that is commonly, and generally, called Kickboxing (among others).

Now, I’m not knocking aerobics nor any of its dance-fitness cousins. All have value and martial arts share many common attributes. Not the least of which is improved, overall general fitness. Dr. Kenneth Cooper first wrote about the benefits of the dance inspired exercise in his 1968 best-selling book, Aerobics. Exercise modalities like this exploded in popularity during the 1970s and on into the 1980s. At first, aerobic group classes focused heavily on high impact movements, but as this fitness genre evolved, it began to incorporate more low impact movement. By the 1990s there was hardly a group fitness class at any gym merely called “aerobics” as those classes began to incorporate other movements that weren’t strictly aerobic, such as cycling, rowing, kettle-bells and yes, aspects from combat sports as well.

A desire to improve one’s physical condition is in my opinion one of the best reasons to take up the sport and art of Kickboxing. I might spark a little bit of controversy by stating that Combat Sport Athletes are the “fittest” athletes on the planet, but that would be a debate I would enjoy and the number of studies that support this claim are numerous enough that I wouldn’t shrink away from the challenge either. Kickboxers, boxers and all their combat sport cousins require enormous amounts of aerobic endurance, strength, power, speed, agility and flexibility. I think quite simply that the reason Kickboxing is so popular today is that in many ways Kickboxing is a metaphor for life and our constant struggle to improve ourselves.

But where does one start?  It’s just not as simple as lacing on the gloves, then starting to  kick ass and take names like “Sugar” Ray Leonard, is it?

It’s not that simple, but it’s not that hard either. It’s called work! That’s all you have to do; put in the work. You don’t need the best gym right in your neighborhood. You don’t need to know the guy who trained some other guy who fights those smoker fights in the cage in those bars and nightclubs of your city or town. Kickboxing is an individual endeavor. Each individual has their reasons for getting into kickboxing and doesn’t need permission from anyone to commit themselves to self-improvement (but we do suggest you consult your physician before beginning training to insure you are healthy enough to begin a physical activity such as kickboxing.) What it requires more than anything is a commitment to invest in the “grind”. It is entirely in your hands. It’s up to you.

So, if you’d like to take this journey with me, there are a few simple things you will need before we get started:

All of this equipment can be found in most sports retail stores in any town, or certainly easily obtained online from Amazon or any number of online merchants. They are not that expensive either, but if you are on a budget, prioritize them in the order I gave to you above. Get a decent jump-rope first. You’re going to spend a lot of time with that rope. Buy one worth getting to know.

And check back with us soon on what to do next. Soon. Until then, ..go jump rope! 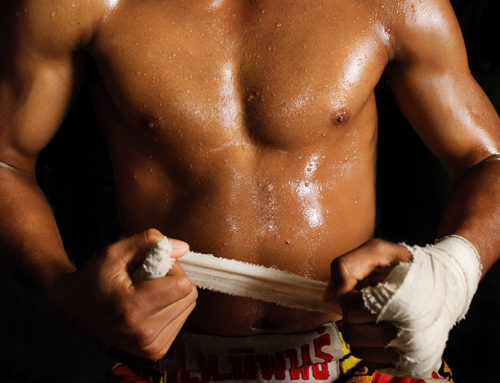 How to properly wrap your hands Gallery

How to properly wrap your hands